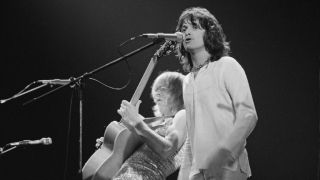 A new book on Yes singer Jon Anderson's early years will be released in October. Jon Anderson And The Warriors – The Road To Yes has been written by Yes author David Watkinson (who wrote the respected 2001 Yes book Perpetual Change) and will be released through Sonicbond Publishing.

"The book tells the story of Jon Anderson’s journey from Lancashire England with his first ever band The Warriors to the start of Yes in 1968," explains Watkinson. "It includes new interviews with Jon and the band members, a family tree, rare and never-before-seen photographs of both The Warriors and Yes, tour dates, memorabilia and a collectables section. This is the most complete book on these early exciting and crazy years."

The new book will be supported by a web page that will go live on the day of release. This features their UK tour dates from 1960 – 66, including notations and more, coming from the original band members diaries.

A limited edition of 250 hardback versions of the book in special dust jacket and signed by the author will be available from Burning Shed. A paperback version will be published in 2020.

Previously unreleased demo recordings, the earliest known Anderson recordings, will be released to coincide with the book's release.