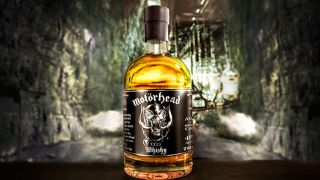 Motorhead have unveiled their own branded whisky.

The tipple adds to the band’s Motorhead Drinks line which already includes beer, wine and vodka. Motorhead Whisky launches on October 1, but only in Sweden for the time being.

Lemmy and co have collaborated with Swedish award-winning distillery Mackmyra on the drink, which is said to have strong bourbon influences.

The frontman – who recently said he had switched from his usual drink of bourbon and Coke to vodka and orange – says: “Life is less painful with Motorhead Whisky. I may consider having a sip now and then.”

The drink is described as an “alert and vital - almost cocky - perfectly balanced whisky with nice caramel and typical vanilla notes from American oak.” Motorhead are said to have played an active role in both choosing casks and blends.

Drummer Mikkey Dee adds: “We think it’s great fun to launch a whisky in collaboration with a Swedish, world-famous distillery, Mackmyra. The whisky is incredibly good, with full character and fully flavoured with a superb bourbon touch, as it’s been aged in new American oak casks.

“All of us in the band have been active in the production process and are very proud over the result, and are happy to now launch such a great, characteristic whisky, Motorhead-style.”

The band recently launched a line of sex toys. Lemmy has returned to touring after fighting off a lung infection that put paid to a number of shows in the US.