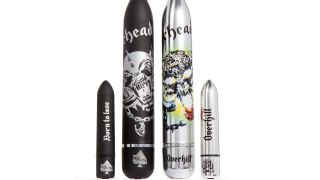 Metal Hammer asked journalist and sex educator Alix Fox to give the new range of Mötorhead vibrators a whirl, and tell us all about them. “Lemmy at ‘em!” she replied…

When I first heard that Lemmy and co. were releasing a new line of sex toys, I wondered whether they’d be some kind of schlong-sucking mechanical mouths that could give you motor(ised) head – but nope.

The little vibe has three constant speeds and seven vibration patterns, while its bigger brother has three speeds and four patterns. Each is powered by AAA batteries (triple As, like an Access All Areas backstage pass, although I recommend caution if you want to use these toys up your backstage passage – see below).

The lil’ titchy ones are £14.99, and the chunkier chappies are £29.99, available exclusively from Lovehoney.

Both models are available in a smooth, shiny silver ‘Overkill’ finish, or with a matte black coating called ‘Ace Of Spades’, and are decorated with the Mötorhead ‘Snaggletooth’ logo and lyrics from their songs like ‘Born To Lose’. They look very rock ‘n’ roll. And, as phallic objects endorsed by Lemmy, very cock ‘n’ mole.*

*I was going to try and avoid mole jokes in this article, but wart-ever.

I give you the lowdown after using ‘em on my down-low moan zone...

Plus, the high quality motors inside these babies pack more of a punch than a Mayweather KO. They buzz like a beehive sprinkled with MDMA. They rev like they’re about to make a cameo appearance on The Fast & The Furious 8. They’re not quiet, so you might want to whack some music on if you’re using them while your flatmates are in the house, and certain vibration patterns kinds sound like a robot jogging, but boy do they shake ‘n’ quake you to your core.

The larger version in particular vibrates so hard that it makes you shake and shudder as though you’re operating a pneumatic drill. If this is your first time trying vibrators, you might even find it a tad overwhelming. For my part(s), I wanted to glue it to my goddamn hand and play with it forevermore. In fact, if I hadn’t had to write this article for Hammer, I’d probably still be in my bedroom now, wasting away from climaxing repeatedly and surrounded by a zillion Magic Trees like that dude from Seven to try and mask the miasmic mist of my orgasmic muff musk.

As well as packing a tonne of raw power, all the toys are 100% waterproof, which means you can play with them in the bath or shower. It makes them really easy to clean, as well – just wash with warm soapy water to remove clunge gunge or willy silly string.

They have a ‘memory’ function, too: turn them on by pressing the button on the base, and they’ll start at the same speed or pattern you last used, so you don’t have to cycle through all the options to find your fave.

Cum-by-arghhhhh, my lord! – My expert tips for playing with the Mötorhead vibrators

The Motörhead Official Pleasure Collection is available now from Lovehoney.