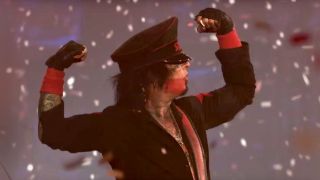 Motley Crue have released a one-minute teaser clip for the movie recorded during their final show.

The band ended their career in Los Angeles on December 31, following a two-year world tour. A contract signed before it began makes it all-but impossible for them to reunite.

Bassist Nikki Sixx said before the show that he hoped he wouldn’t cry as they bade their farewells. In the end it was frontman Vince Neil who burst into tears – while drummer Tommy Lee’s roller coaster drumkit broke down midway through his solo, leaving him hanging upside down until he could be rescued.

The concert movie will include the entire performance, plus exclusive interviews and behind-the-scenes footage. Its release date will be confirmed in due course.

Crue are also continuing work on the film based on their notorious book The Dirt, which is also expected this year.