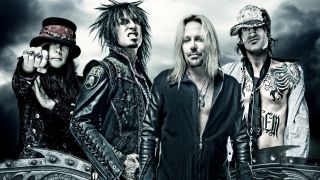 Motley Crue frontman Vince Neil says The Dirt should be out next summer.

The rock veterans are working with Jackass director Jeff Tremaine on the film, based on the book of the same name which was released in 2001. The band invited the cast on tour with them to learn first-hand what it’s like to be a rock star.

Neil tells Las Vegas Magazine: “We just got a new script about three or four months ago, the rewrite of the old script, and it’s way, way better. It’s such a great script. This movie should be out in the summer of 2016. It does stay pretty close to The Dirt, so if you’ve read it, it’s really something to look forward to.

He adds: “It’s funny, I saw the table read of the last script. They have these different actors playing each person. It was just kind of weird hearing somebody say your words. It’s a bit of a trip. It starts just like The Dirt. The first scene is the first pages of The Dirt, in our apartment in Hollywood. There’s a party going on.

Meanwhile, the band’s bassist Nikki Sixx says he felt “at home” the first time he performed with the group.

Sixx tells LA Weekly: “I remember walking down the stairs onto the stage and hardly knowing Tommy and Vince and Mick – but at the same time feeling like I’d known them my whole life. Breaking into that first song, I remember just feeling at home.”

He adds: “The thing I felt in the early rehearsals, was that each member of the band brought a unique characteristic to the music. Nobody has ever sounded like Vince. Mick Mars has a way of playing guitar where it’s not subtle. It’s brutal. Tommy has this great rhythm machine and I had this very punk-rock, ratty bass style.

“You mix all this together, and that’s why we enjoyed doing covers early on. We found no matter what we played, it sounds like Motley Crue.”

The band are to play their last shows next week on The Final Tour, with three hometown concerts in the Staples Center, Los Angeles.