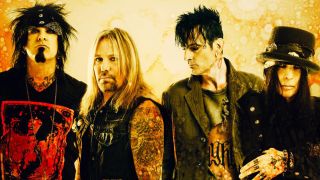 Nikki Sixx’s Motley Crue bandmates aren’t quite as dismissive of the Rock And Roll Hall Of Fame as the bassist – but they certainly won’t shed any tears if they are never inducted.

Sixx said in January that if Crue were ever inducted into the Rock Hall, he would likely decline the award, describing it as an out-of-touch “fixed old-boy network.”

Drummer Tommy Lee and guitarist Mick Mars have given their take on the matter to Rolling Stone. And while they aren’t as harsh as Sixx, they are both insistent that they don’t need the Rock Hall to tell them that they’ve achieved something special.

Lee says: “I do give a shit about it, because it’s a time-stamp. It’s the acknowledgement of your peers and fans and the music industry. But then again, there’s a part of me that goes, ‘If we don’t, that’s fucking cool, too.’

“In my heart, I know that we came, we saw, we kicked its fucking ass. I don’t need a pat on the back, or an induction, or another platinum album or two. Maybe I’m just not good with compliments.”

Mars, meanwhile, compares the award – which is given out annually and this year saw Joan Jett, Green Day and Lou Reed inducted – as a child begin given a gold star for taking a nap.

He adds: “It’s like when you’re a kid in kindergarten, and you take a nap and get a gold star as a reward. I don’t need a handful of people to say that I got a gold star, because I already got it from my fans. I see the crowds, I see the enthusiasm, I see all that stuff, and that’s already satisfying enough for me.”

Sixx adds that he believes there are many bands who came before Crue that deserve to be inducted more so than his own band. He says: “I’m a huge Mott The Hoople fan. If Motley Crue got in before Mott The Hoople, I’d snap.”

Crue are currently on their final world tour.