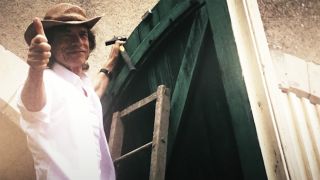 Mick does a spot of handiwork

Mick Jagger appeared on The Tonight Show Starring Jimmy Fallon this week for a special quarantine video in conjunction with Save The Children.

In the style of an old BBC news bulletin, the spoof clip saw the Rolling Stones frontman take on a list of daily chores, including gardening, repair work, chopping veg – and herding sheep and lambs.

And the vocalist didn’t stop there, with viewers seeing the 76-year-old keeping fit by doing a few Jumpin’ Jack Flash-inspired moves.

The Stones have just launched their weekly Extra Licks series which is being broadcast on the band’s YouTube channel – part of the streaming giant’s Stay Home campaign – and is in partnership with Eagle Rock Entertainment.

Each video is shown as a YouTube Premiere and features rare live performances and bonus footage from concert films from throughout the Stones’ career – including performances from the 1994 Voodoo Lounge Tour and the 2016 Latin America Ole! Tour.

Jagger said: “So the Stones were in the studio recording some new material before the lockdown and there was one song we thought would resonate through the times that we’re living in right now.

“We’ve worked on it in isolation. And here it is – I hope you like it.”

Living In A Ghost Town is also available in limited 10" orange and purple vinyl editions, which will be released on June 26, and a CD, due on May 29.