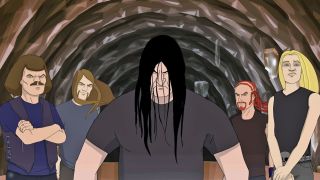 The future of animated series Metalocalypse is in doubt after its creator revealed TV bosses passed on airing a fifth season.

Brendon Small says via Twitter that the show – which was aired on the Adult Swim channel – would not return for a fifth season, which he intended to be the finale.

Metalocalypse centres on fictional death metal band Dethklok and the news of the show’s demise led to a petition from fans calling for it to be saved.

Small says: “For those complaining about lack season 5. Was a network decision – I wanted to do it as a final big mini series. They said no. True story.”

Small previously told Metal Injection he hoped to wrap up the series with a final story and new music, but “not in a way fans are used to.”