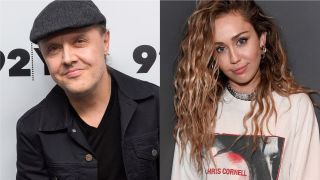 Last week at The Forum in Los Angeles, stars from across the music world united at a tribute concert for late Soundgarden and Audioslave great, Chris Cornell.

The show was hosted by US TV star Jimmy Kimmel, while members of Soundgarden, Audioslave, Temple Of The Dog, Foo Fighters, Metallica, Pearl Jam, Jane’s Addiction, Melvins, Queens Of The Stone Age, Black Sabbath and more took to the stage to pay tribute to the vocalist.

Also among the names was Miley Cyrus, who garnered praise from across the internet for her take on Cornell’s Two Drink Minimum and Temple Of The Dog's Say Hello 2 Heaven – and one fan was Metallica drummer Lars Ulrich, who praised the singer for her performance of the latter.

Ulrich posted a picture of himself with Cyrus backstage at the show, saying: “Miley, still stunned by your next level version of Say Hello 2 Heaven for Chris! Beyond inspiring.”

Following her performance, Cyrus told the crowd: “I wanted to sing this song tonight. We love you, Chris. Thank you for brining us all together like you always have. It’s a fucking honour.”

The concert raised more than $1 million, with the cash going to the EBMRF (The Epidermolysis Bullosa Medical Research Foundation).

Late last year, a career-spanning collection of Cornell’s work was released, along with a video for the track When Bad Does Good featuring the vocalist’s son Christopher.

Miley, still stunned by your next level version of “Say Hello 2 Heaven” for Chris! Beyond inspiring...🙏 #IAmTheHighway 📸 by @rosshalfin Lars Ulrich