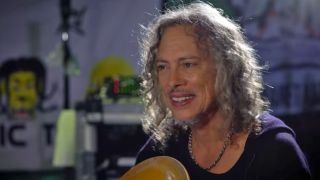 Metallica’s Kirk Hammett says playing the guitar is his cure for anxiety and stress.

In an advert for guitar string maker Ernie Ball, Hammett discusses his reliance on music when it comes to dealing with the everyday ills of life.

Hammett says: “If I’m bummed out, I’ll go to my guitar. A lot of times when I’m really stressed out or I’m dealing with anxiety, I’ll just play until I calm down.

“When I have this feeling inside that needs to get out, the guitar helps that feeling. It’s a creative tool, but on the other hand, it’s also a rehabilitative, emotional, spiritual tool that I use to feed my inner self.”

The 53-year-old also reflects on how his childhood love for Kiss and Jimi Hendrix led him to take up the guitar and eventually go on to form what would become one of the biggest bands on the planet.

The full video interview can be viewed below.

Metallica will release their 10th album Hardwired… to Self-Destruct on November 18 and they have announced a number of live appearances in the coming months, with more to be added in due course.

Hammett features in the list of the 100 Greatest Guitar Solos in the new issue of Classic Rock magazine, which is out now and available in print and via TeamRock+.

Hammett is one of the guest stars lined up for next month’s Classic Rock Roll Of Honour being held in Tokyo.