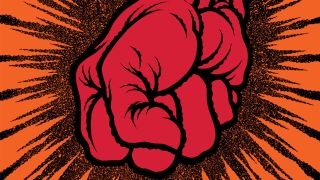 Rock’s work on the 2003 album was the last time he was at the helm for Metallica and it has been described by many fans as the band’s worst record. The raw production and total lack of guitar solos was seen by many as too much of a departure from the thrash icons’ previous efforts.

But Rock says both Led Zeppelin hero Page and White Stripes mainman White are fans. Page made his comments when the pair bumped into each other at a hotel, while White’s praise came at a film screening.

Rock tells Talk Is Jericho (via Blabbermouth): “I know Jimmy. He got up and walked over to me, gave me a big hug, and said, ‘It’s great to see you, I love the St Anger album.’

“I was at the premiere, and Jack White came over. He says, ‘I’m Jack White.’ I said, ‘I know.’ He says, ‘That’s my favourite Metallica album.’ So I’m okay with those two.”

Rock accepts the album was difficult for fans to get into.

He says: “It’s a very odd record. But it’s the truth. It’s the raw truth about them at that time. We could talk about this for a long time, but, the sound of the drums on that, I got the first set that Lars ever used when they rehearsed in the house in Oakland, when they first got together. I set it up and Lars stared at it for months. And then one day he sat down and played, and it was ringing and it was raw, and he said, ‘This is it.’

“Lars said, ‘No guitar solos.’ So every song, Kirk comes in and plays a solo, and if it doesn’t make the song better, we’re not using it — and we went through the whole album like that.”

Metallica are working on the follow-up to 2008’s Death Magnetic and will headline this year’s Reading And Leeds festivals.