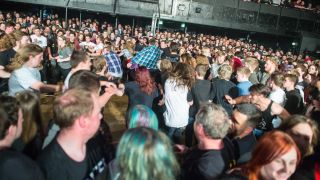 The co-owner of Q Prime, a talent management company that has handled the careers of Def Leppard, Red Hot Chili Peppers and Jimmy Page, shared his thoughts on the music business on BBC Radio 4’s Today program.

Mensch tells the BBC: “There aren’t quality new hard rock bands to keep it up. Hard rock used to appeal, essentially, to your average 15-year-old male. He had bad skin, he didn’t like his parents, girls didn’t like him, and he was an angry kid – he was frustrated. And, lo and behold, there were 10,000 other people like yourself.

“The problem is, and we ask this all the time, where is the new Metallica? Please, anybody out there that’s in a hard rock band under the age of 25, call me. We need you.”

Mensch admits it is harder to break new artists in a digital environment that is focused on single success over selling albums.

Mensch says: “It’s way more difficult. Nowadays you may not care about going to a concert or mucking around in the rain at Glastonbury to see them due to one song that you now own. So my job is to convince you that the band that I’m interested in promoting is an album band, a band of your life.

“The biggest problem with the new record business is I don’t know who the fans are. Fans are the people who will actually pay for something, pay for a ticket. I don’t really care so much if you won’t pay for an album anymore – I’ve kind of understood that that horse has bolted – but if I don’t get you to pay for a ticket, then you’re not really a fan of mine.

“And so, therefore my band won’t make any money, and they may, at the age of 33, have to look around and go, ‘It’s time to join Uncle Simon’s car dealership down the street.’”

Metallica continue to work on their 10th album as they approach their 35th anniversary next year, something drummer Lars Ulrich says he isn’t interested in celebrating after the band hosted a week’s worth of shows in San Francisco in 2011 to mark 30 years as a group.