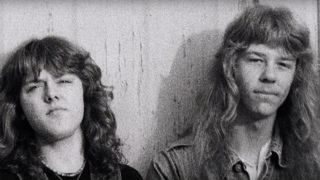 Early days: Ulrich and Hetfield pictured in the 1980s

Metallica frontman James Hetfield and drummer Lars Ulrich recall their “awkward” first meeting in a trailer from a documentary to be released this week.

Landmark – Metallica: The Early Years will be launched by Spotify on August 18 (Thursday) in four parts, focusing on the thrash icons’ history from 1981 until the launch of second album Ride The Lightning in 1984.

In the preview clip, Hetfield says of Ulrich: “When I met Lars he was pretty much a stinky European kid. He introduced me to a-whole-nother world of music.”

Ulrich remembers his bandmate by saying: “He was really awkward.”

Hetfield also recalls the contibution of late bassist Cliff Burton, reporting: “Cliff, as a writer, brought a grandness to it – ‘this should be giant.’”

And Anthrax guitarist Scott Ian says: “These were guys we met when they were pimply-faced metalheads like us. I certainly had that moment going, ‘Our friends are going to be one of the biggest bands in the world.’”

Spotify will provide custom playlists to accompany each part of the half-hour documentary, which consists of chapters entitled Metal Militia, Metal Up Your Ass, Sophistication And Brutality and Armageddon’s Here.

Producers say: “Metallica: The Early Years celebrates penpals, the birth of thrash metal, heavy-riffing cellists, and the origins of one of rock’s most influential bands.

The band’s 10th album is expected before the end of the year. They’ll stream their Minneapolis show live on August 20, and release a book on the making of groundbreaking album Master Of Puppets later this month.