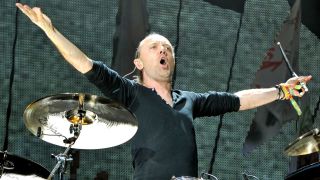 Metallica drummer Lars Ulrich says the long-awaited follow-up to 2008 album Death Magnetic is “pretty close” to being written – and they’ll play some of their new tracks live during the summer.

But he’s asked fans for their continued patience over the project, which has been gradually taking shape over the past few years.

Ulrich tells Rolling Stone: “We are fucking it in. We’ve got lots of songs and we’re honing and tweaking them.”

He says of their working format: “In our world there’s been a distinct difference between the creative phase and the recording phase. With this project we’re trying to bridge the two a little more organically, and not have such a great divide.

“We want to see if we can bring some of the creative curiosity, the impulsive stuff that happens when you’re first playing a song in the studio.”

Asked about the chance of hearing new material during the summer – including headline appearances at this year’s Reading and Leeds festivals – he replies: “I hope so. Absolutely.”

“There’s a lot of stuff going on as life continues with family and personal events. But we’re certainly down there pretty much every day.”

And he adds that the release, when it comes, will be treated in the usual fashion with a long run-in. “It’s not like we’re going to just give it to iTunes on Thursday without telling anybody. That’s not on the cards.”

Earlier this week Ulrich outlined plans for a series of early-era Metallica re-releases, and said he’d found inspiration in the innocence and youth of their first recordings.