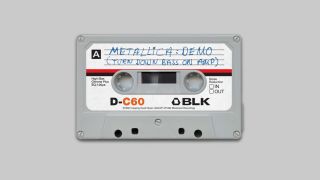 Metallica drummer Lars Ulrich says the band aimed to retain the feeling of youth and innocence while remastering their 1982 demo tape No Live ’Til Leather.

It’s to be launched as a special offer for Record Store Day on April 18 – but it marks the beginning of a series of re-releases as the thrash giants revisit their early catalogue.

Ulrich tells Rolling Stone: “It has the same innocence – and, I guess, borderline ignorance – of four kids barely out of puberty, rockin’ along, doing their thing.

“It just sounds so fucking innocent and so instinctive. When we’re writing new songs James Hetfield will play like 34 ways a song could be better. No Live ’Til Leather sounds so effortless, like it was put together in an afternoon – which it was.

The seven-track cassette was recorded with Ulrich, frontman Hetfield, future Megadeth mainman Dave Mustaine and bassist Ron McGovney. The RSD edition is to be followed with an expanded version.

But Ulrich can’t confirm the contents – he says he’s “sifting through a lot of goodies that are laying around in cardboard boxes and tape vaults.”

More is to come from the Metallica archive, once the details have been confirmed. “Yesterday I found another tape and there was some crazy stuff on the B-Side that I didn’t even know existed,” says the drummer. “It’s all coming.”

The series will be launched via Metallica’s own label, Blackened Recordings.