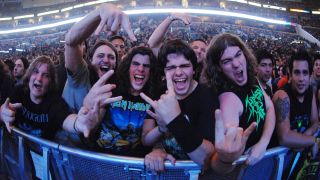 Metal fans are more loyal to their favourite bands than followers of any other genre in the world, according to research by streaming service Spotify.

Figures suggest that metal fans are over a fifth more likely to keep listening to core bands like Metallica and Iron Maiden, while fans of the next-highest genre, pop, will tend to listen to a wider range of acts.

Analysts monitored how often a listener would return to artists defined as central to a genre. They discovered that, on a global basis, metal fans stick to their favourites much more often than those who prefer pop, folk, country, rock, hip-hop, reggae, jazz, EDM, classical or blues.

Spotify say: “Metal fans are the most loyal of all. One could also conclude that the more guitar-oriented genres inspire more loyalty in the listener.

“This doesn’t necessarily mean metal is better than jazz – metalheads would disagree – but it does tell us that metal fans are in fact the most hardcore, according to this new measure of genre loyalty.”

And that loyalty has a spin-off effect on smaller labels hoping to present new bands to the Spotify audience. Bob Lugowe of Relapse Records tells Mashable: “Streaming has been particularly beneficial as a promotional tool and a discovery vehicle.”

Vince Edwards of Metal Blade Records adds: “For a small label to be able to capitalise on those markets in any manner is a newfound opportunity.”