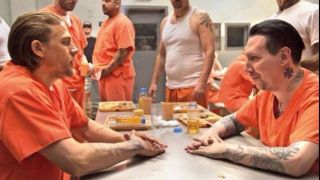 Marilyn Manson has posted a shot of himself filming a tense scene in the Sons Of Anarchy final season.

He agreed to play white supremacist Ron Tully partly because he and his dad are such fans of the show.

The scene appears to be a prison showdown between Manson’s character and Jax Teller, played by star Charlie Hunnam.

The shock-rocker says via Twitter: “This isn’t brunch. Tough acting like you want to kill your favourite character.” He adds on Instagram: “Someone is gonna be someone else’s bitch in this scenario – stare-down contest.

“It’s a gift from God to get a day-job playing a felon, rather than the opposite.”

Sons Of Anarchy’s seventh season begins airing in the US in September.