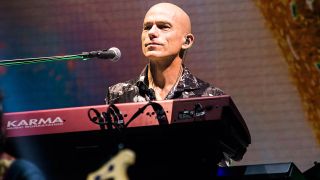 Marillion keyboard player Mark Kelly has announced he is to release a solo album. In a series of posts on his Facebook page Kelly announced "Finally, my first solo album is coming!", and revealing the url of a new website bearing the name Mark Kelly's Marathon.

Although Marillion members Steve Rothery, Steve Hogarth and Pete Trewavas are all fairly active with musical projects outside of the band, up until now both Kelly and drummer Ian Mosley have kept fairly low-key as far as work outside the band goes.

Kelly has appeared on albums by Ayreon, John Wesley, Jump, Edison's Children and DeeExpus and also played keyboards with Scottish indie band Travis at the Isle Of Wight and T-In The Park festivals in 2005, but he's thus far avoided going the solo route.

There's no release date as yet, or many other details, but fans can check out a website with a somewhat cryptic story and the chance to sign up for further information.