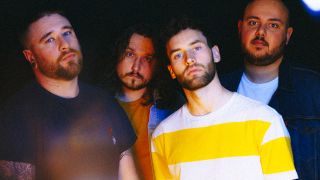 The band issued a statement on Facebook informing fans of the news, saying it was a difficult decision to make, but they feel they’ve taken the band as far as they could, “both professionally and personally.”

The statement reads: “After 10 years, four albums and countless tours, it's time to announce that Mallory Knox has come to the end of the road.

“Unfortunately we've reached the point where we feel we've taken Mallory Knox as far as we can both professionally and personally.

“This isn't an easy decision for us to make, ending something that we started when we were teenagers, but we’re grateful to all of you that have granted us the opportunity of a lifetime.

“We’ve decided that this tour is not only the perfect opportunity to promote what is our final record but also celebrate what has been an incredible decade with you all.”

Sam Douglas, James Gillett, Joe Savins and Dave Rawling add: “We never thought we would achieve what we have and we couldn't be prouder of the music that we're leaving behind.

The Cambridge outfit released their final album just last month. The self-titled record featured Douglas on vocals. The bassist took over behind the mic from Mikey Chapman, who quit the band in February 2018.

Mallory Knox: Mallory Knox
Mallory Knox released their fourth album just last month – and it'll be their final record after announcing they're to split following the conclusion of their UK tour in October.View Deal