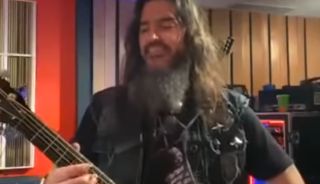 Robb Flynn hasn’t been twiddling his thumbs during the recent enforced downtime. The Machine Head mainman has been filming himself talking, drinking and playing some stone cold classics on his acoustic guitar, then putting it out into the world as part of his Acoustic Happy Hour livestream.

In the latest edition, he turns his attention to a bunch of metal classics, new and old. Among them are Slipknot’s Snuff, Aerials by System Of A Down and Deftones’ Change (In The House Of Flies) and Dio’s Holy Diver. He wanders a bit further afield too, opening with Pink Floyd’s 1975 classic Wish You Were Here and covering Pearl Jam’s Black. He also turned in unplugged versions of Machine Head’s Is Anybody Out There? and Circle The Drain.

Machine Head rescheduled their 2020 Burn My Eyes 25th anniversary UK and European tour. The tour will now kick off in Pamplona on October 8 and wrap up in London on November 23.