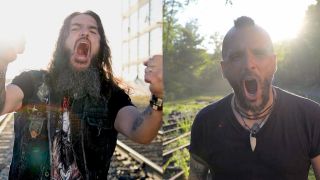 Machine Head have teamed up with Killswitch Engage singer Jesse Leach for a blistering new song Stop The Bleeding, inspired by the death of George Floyd and the wave of protest that sprang up in its wake.

The song features Machine Head mainman Robb Flynn and Leach spitting out lines such as: “Beating after beating/Throat choked under knee/Help me please.”

Flynn says of Stop The Bleeding: "I wrote and sang the lyrics on Wednesday May 27, 2020, the day that the four officers who murdered George Floyd were (originally) not charged with anything. This day was engulfed in protests and riots across America. I drove into Oakland, past large demonstrations already happening and in a fury wrote down everything I was feeling after watching the horrific footage. Within hours, what I wanted to say, what I needed to say had been recorded in the song.”

Leach adds: “Robb has been a frequent voice of the voiceless in these times, so teaming up with him is a no brainer. We need more of our Metal Community to speak out on social issues and help raise awareness, especially during these crucial times. Music is the soundtrack to our lives, it transcends language and culture.

Stop The Bleeding is one of two new Machine Head songs that appear on digital single Civil Unrest. The other is the single’s B-side, Bulletproof, another protest song partly inspired by the death murder of another unarmed African-American man, Ahmaud Arbery, at the hands of white supremacists in February 2020.

The original run of shows was due to take place throughout April, May and June but the tour was postponed due to the coronavirus pandemic.

The tour will now kick off in Pamplona on October 8 and wrap up in London on November 23.