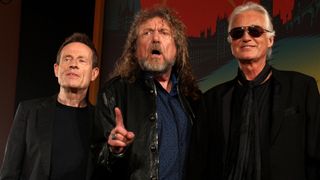 Most of you reading this article probably view Led Zeppelin as rock gods – but, chances are, you know at least one person who regards them first and foremost as compositional pickpockets.

Hard Rock fans either love them unequivocally or will immediately voice suspicions about their supposed songwriting plagiarism. Eventually, the latter group will concede that yes, Plant possessed a spectacular vocal range, Bonham wielded an almighty percussive prowess, and Led Zep has had an undeniable influence on over two generations of musicians. But not before they hammer home their initial point: “Led Zeppelin are thieves!”

For the last several months the distrust regarding Zep’s originality and their habit of ‘borrowing’ from other songs reached critical mass when it was announced that the estate of Spirit’s Randy California was suing Zeppelin over claims that Stairway To Heaven, their incontrovertible masterpiece, was inspired by Taurus, a track the late California composed for Spirit’s eponymous 1968 debut album. The vinyl debut of Taurus preceded Stairway by almost four years and its instantly recognisable opening chords do bear an uncanny resemblance to those of Taurus. To be fair though – and as Zeppelin defence pointed out – numerous songs written decades or even centuries before Taurus also contain those same chords.

So the court ruled in Zeppelin’s favour and found that they did NOT plagiarise Taurus.

And yet the dissenters grumble on. Led Zeppelin opened for Spirit in late December of 1968 and were incorporating the riff from Spirit’s Fresh Garbage into their set a mere two weeks later, they point out. How did Zep manage to hear Fresh Garbage when they claimed in court to have never heard Taurus – both songs are on the first side of the debut Spirit album! Were they listening to Fresh Garbage but somehow decided to take a smoke break and therefore lifted the needle on the album before Taurus came on? If not, then how did they hear Fresh Garbage?

Well, maybe they heard Spirit play it live? Maybe at a soundcheck? Or maybe they heard it on the radio, dug the riff, and decided to add it to the sprawling jam section in the middle of their then nightly mauling of Garnet Mimms’ As Long As I Have You. Regardless, the facts are that the opening chords of Stairway only constitute a small percentage of an eight minute aural monolith. Does Taurus contain the majestic orchestral-like chords that precede Page’s solo in Stairway? No. Does Taurus boast that heavier-than-God chord sequence where Plant starts to howl, ‘And as we wind on down the road…’? No.

So why can’t we drop all this “Led Zeppelin are plagiarists” bullshit?

In the last decade or so, the songwriting credits on several Zep tracks have been revised to include the composers’ name of the track that gave Page & Co. their initial inspiration. (“Initial inspiration” being a term that I’m using very loosely here.)

Anne Bredon’s name has been added to the credits of Babe I’m Gonna Leave You (why? Well, she only sorta wrote the damn song*), Willie Dixon’s to Whole Lotta Love (Plant pretty much cribbed the lyrics wholesale from Willie’s You Need Love), Howlin’ Wolf (Chester Burnett) to The Lemon Song (basically The Wolf’s Killing Floor turned up to eleven) and Willie Dixon (again!) to Bring It On Home.

Did Zeppelin turn these songs upside down to the point where the original song is almost (almost) unrecognisable? In most cases, yes. But let’s switch that around and put ourselves in Zeppelin’s place. If you or I took say, Kashmir, played it on acoustic guitar and accordion, rewrote the lyrics, put our names on the thing as sole composers, and then it sold two million copies, do you think Page, Plant, Atlantic Records, and the song’s publisher would just go, “Wow, that’s cool!” and carry on their merry way?

If you have any doubt as to the answer to that then go on and try it. But you’d better have just won the lottery or plan on immediately relocating. Jimmy, Robert and their associates would have a damn good case and a damn good reason to be miffed because, regardless of the modifications we’ve made, it’s still their fucking song.

So why wouldn’t the reverse be true as well?

On the evening of August 25th, 1967, The Yardbirds (now featuring a nascent Jimmy Page) played New York’s Village Theatre. Opening for them was a little known Greenwich Village folkie named Jake Holmes. Jake’s set featured a self-penned little number called Dazed And Confused. According to Yardbirds drummer Jim McCarty, the band purchased Jake’s album, The Above Ground Sound Of Jake Holmes (which included Dazed And Confused) the next day and decided to try their hand at a version of the song.

The short-lived, oft-bootlegged album Live Yardbirds Featuring Jimmy Page, recorded at the Anderson Theater in New York on March 30th, 1968 documents the fruits of their efforts and appears as a track entitled I’m Confused. Yardbirds vocalist Keith Relf’s lyrics are near-identical to Holmes’ and the instantly recognisable, moody, descending bass notes of Holmes’ original are front and centre in the Yardbirds version. True to their ‘rave-up’ roots, the group splices the double-time guitar solo section of their last single, Think About It, into the middle of I’m Confused along with the unearthly sound of Page’s bowed guitar. Interestingly, there is no songwriting credit attached to the track. (No fault of the band: it was released without their knowledge or permission. Live Yardbirds Featuring Jimmy Page was released legitimately by Epic Records before Peter Grant immediately sued it out of circulation.)

The Dazed And Confused that emerges on the first Led Zeppelin album is close to the Yardbirds’ version but utilises the full Jake Holmes title, further revised lyrics, and additional melodic touches such as Page’s eerie guitar harmonics during the song’s introduction. Jake Holmes name is nowhere to be seen and the song is credited solely to Page. So has the original Jake Holmes version been modified to the point where the original song is barely recognisable? Well, sort of, though it’s impossible to dismiss that bass line along with the song title and the identical, ‘I’ve been dazed and confused’ lyrical opening.

In the early 1980s, Holmes contacted Led Zeppelin’s representatives stating, “I understand it’s a collaborative effort, but I think you should give me credit at least and some remuneration.” He heard nothing back. In June 2010, Holmes filed a lawsuit in United States District Court, alleging copyright infringement and naming Page as a co-defendant. In court documents Holmes cited a 1967 copyright registration for Dazed And Confused which was renewed in 1995. The parties eventually settled out of court in January 2012. Led Zeppelin’s live album, Celebration Day, as well as recent album reissues now credit the song to ‘Page; inspired by Jake Holmes’.

So where does this leave me? Whose side am I on? Am I in the “Led Zep can do no wrong” camp or on the “they’re thieving bastards” side?

There’s an entirely different way of viewing this issue. I’m a hardcore Led Zeppelin fan who thinks they took a little bit too much poetic license with a few of their songs. Whenever I hear Zep’s Dazed And Confused, Jake Holmes never, ever crosses my mind. If I concentrate hard enough while it’s playing, I’m 13 years old again, sitting in my darkened bedroom with the lava lamp making strange, pulsating shapes on the wall while the patchouli incense fills my nostrils, and I’m marvelling at this amazing, new music that I’ve discovered. Music that will stay with me for life.

So I can live with it, BUT…

When all is one and one is all, Zep’s refusal to acknowledge past mistakes and liberties really is to be a rock and not to roll. It all seems so contrary to the spirit of Led Zeppelin’s music – music so righteously good, with songs and arrangements that introduced many of us to the blues and to folk music, music so indebted to the past but forging a bright, heavy new future – that some sort of acknowledgement might have restored some karma.

I suppose I didn’t really want Zep to be found guilty, but I want to shout down the cynics that say they’re thieving bastards. I want balance restored. For Page and Plant to say, “Look, we were young, we were naive. Everyone was doing it. Being a musician is often about channelling influences and creating something new from old tunes.”

I want them to prove that there’s still time to change the road you’re on.

David Tedds is a former record label executive, CD reissue producer, and All-American Alien Boy. He was obsessed with Rock’n’Roll before he even saw his first colour television.

* To be fair to Zep, the origins of Babe, I’m Gonna Leave You were always a little murky. Joan Baez was the first to record it for her 1962 In Concert album, and the song ran without credit – she’d learned from a friend of Anne Bredon’s and had assumed it was a traditional song. Baez later gave sole credit to Bredon, but Page heard the song on Baez album where it was uncredited.