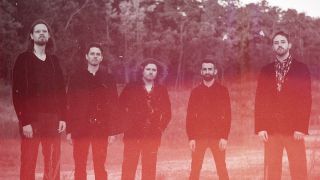 New Jersey based prog rockers The Tea Club have released a new single, If I Mean When, which you can listen to in full below. The sing is taken from the band's forthcoming new album If/When, which they will release on July 30.

"I felt bombarded by hopelessness and cynicism from all directions," singer Dan McGowan explains of writing the lyrics to the new single. "It felt like I was being attacked... I was trying to maintain hope, but I was being beaten down. So I started to come up with these lyrics that were like a caricature of that extreme hopelessness: 'Yeah, yeah, we're all going to die, and life is meaningless and everyone knows it, so why bother?' It was my sarcastic way of pushing back, but I think I accidentally wound up saying something really sincere with it."

"I remember the night Dan showed me the song for the first time," says brother and guitarist Patrick McGowan. "As soon as he started playing those opening chords I felt the hair on the back of my neck stand up. By the time he got through the first chorus I was in tears. I immediately reached for my guitar and we had the backbone of the song worked out in 20 minutes. It felt very special. I remember saying 'thank you' over and over in my head that night."

Pre-orders for If/When are available from the band's bandcamp page.