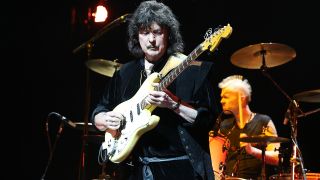 Ritchie Blackmore’s Rainbow have released a stream of their new single.

It’s titled The Storm, and it follows Black Sheep Of The Family, which appeared last month.

The Storm originally appeared on Blackmore’s Night album Fires At Midnight – which was released back in 2001, although the new version, as you might expect, has a much harder and rockier edge.

Check out both versions below.

In 2017, the band released their first new recordings in over two decades: a re-working of the band’s 1981 hit I Surrender – originally sung by Joe Lynn Turner – and a cover of Edward Elgar’s Land Of Hope And Glory.