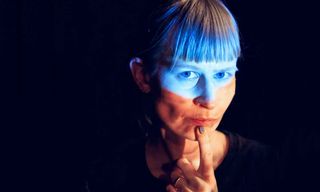 Jenny Hval has released a new standalone single, Bonus Material. The sparse song features saxophone by Espen Reinertsen, who appeared on her recent album, The Practice of Love.

“It’s an unfinished track about unfinished substances leaking into one another,” says Hval. “Trash practising love.”

Hval’s Practice Of Love was released via Sacred Bones last year. She said of the album, “Love as a theme in art has been the domain of the canonised, big artists, and I have always seen myself as a minor character – a voice that speaks of other things. But in the last few years I have wanted to take a closer look at the practice of otherness, this fragile performance, and how it can express love, intimacy, empathy and desire.”