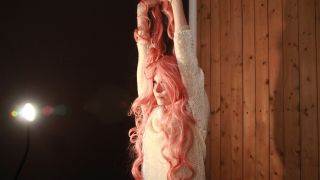 “I hope my music will put people into a state that’s connected to their own lives,” says the quietly subversive Jenny Hval, her tone ice cool. “But not in the way that a happy pop song in a club does. I’m more up for the weird things that happen in bathrooms, those weird confrontations with freaks. When you live in a city you’re constantly trying to avoid confrontation, but that is what makes you.”

The Oslo artist, writer and musician has certainly confronted and challenged us since To Sing You Apple Trees, her debut back in 2006 released under the alias Rockettothesky. Hval has gone on to develop a relentlessly arty, impressionistic musical style and lyrically, few can match her for post-feminist candour. ‘That night I watched people fucking on my computer,’ is the line that opened the title track of her 2013 breakthrough album Innocence Is Kinky. A discomfiting, somnambulant stroll between id and ego, it’s a record where nothing’s ever quite what it seems. Catchy in parts, too.

This provocative direction reaches its apex on her powerfully intimate, joyfully disturbing new one, Apocalypse, Girl. “I made some kind of small step in history. Some tracks were played on the BBC, and the DJ had to go through a long process of getting approval from the Radio 3 bosses – the old guys with beards – because I said the word ‘cunt’ in a lyric. They argued well on my behalf and the songs got played.”

You can see why that lofty station took the risk. Hval’s unflinching music makes for a truly unique statement – an assured display of self-doubt; a confident expression of uncertainty. Whereas in the past she excised any ‘girliness’ from her music, she has drawn on just that this time round, parlaying it into a warped, transgressive take on the confessional singer/songwriter nexus. Pretentious? A little. Progressive? Definitely.

I made some kind of small step in history.

Vocally there are hints of her early heroes, avant‑gardists Diamanda Galás and Annette Peacock, as well as Björk, Portishead’s Beth Gibbons and, unmistakably, the Cocteau Twins’ Liz Fraser. “She had an amazing ability to form sensual language without that layer of meaning. As a foreigner it was so freeing for me to not have to find out the lyrics or meaning. I have a lot of consonants on my album. I love them. So much of my singing is done with my lips.”

It’s a telling observation, both curious and apt.

Hval will tour the US again at the end of August. Earlier this year she was there supporting another eccentric pop outfit, St Vincent. Hval’s show was pared down and video-heavy, and she played to backing tracks. “That’s probably illegal in the prog world!” she surmises, correctly. “But it’s how I had to do it. I sort of baffled St Vincent’s fans. You’ll see tweets after a show saying ,‘What the fuck?’ But those are the people who will investigate your music further.”

There is much for them to discover.