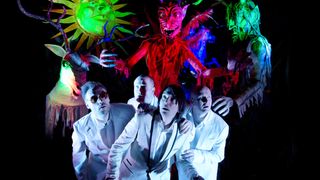 Amplifier have released a stream of their new album Trippin’ With Dr Faustus ahead of its official launch exclusively with Prog.

The follow-up to 2014’s Mystoria is out tomorrow (Friday, June 30) but Prog readers can listen to all 10 tracks now.

Speaking about the new album, vocalist and guitarist Sel Balamir told Prog: “Without wanting to pop the balloon of conceptual mystique, it’s not really a concept album. They’re just songs that have gestated and evolved over a certain period.

“Every period of your life has a different colour and flavour, and this album reflects our lives in the past four or five years – we’re blokes in our 40s and we have sheds.

“A lot of it is about the moral maze and the conundrums offered by even the most insignificant, minute choices. Like, when you go and buy a can of beans, you’re forced to ask if orphans are dying because you buy them. You’re forced to ask, ‘What are the implications?’”

Trippin’ With Dr Faustus is now available for pre-order. Find the album stream, cover artwork and full tracklist below.