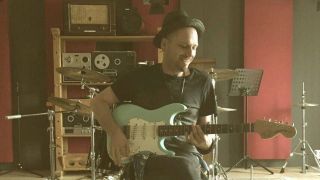 Lifesigns have split with guitarist and vocalist Niko Tsonev.

The Bulgarian-born musician says he’s leaving so he can focus on other music projects. He thanks his former bandmates, keyboardist/vocalist John Young, bassist Jon Poole and drummer/percussionist Frosty Beedle for the “music and laughter” throughout his tenure.

Tsonev says: “After being a part of Lifesigns for three and a half years, I’ve made the decision to depart from the band.

“John, Frosty, Steve, Jon and Brett will always be like a family to me and I’m so proud with what we’ve achieved together – the small pub gigs, the sweaty splitter bus tours, the Cruise To The Edge shows, the UTB DVD – which will always feel like my baby after the countless hours of work put in.

“And last but not least, playing in front of tens of thousands of people during the amazing 2016 Summer Tour and the Lorelei, Ramblin’ Man and Cropredy Festivals.

“These have all been very very special moments and I would like to thank the band for all the music and laughter we’ve had together – in high and low. I wish Lifesigns all the success for the future and if you are a fan of the band, the thanks and wishes are extended to you too.

“My focus now will be on my other musical projects which I’m sure will involve many of you.”

Lifesigns say: “Niko has decided it’s time to move on to pastures new and as such we wish him much luck and happiness with all future musical endeavours. We’ve loved working with Niko these last three-and-a-half years.

“It’s been an amazing time and we have great memories to take with us as Lifesigns continues its journey forwards.”

Lifesigns have not said whether they intend to replace Tsonev.

Meanwhile, Lifesigns recently announced they’ll launch a crowdfunder for their next record Cardington. The artwork can be viewed below.