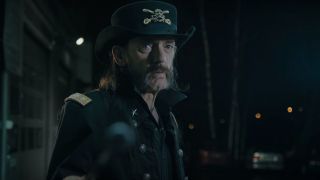 The makers of a milk advert filmed by Lemmy weeks before he died have released the footage as a tribute to the Motorhead icon.

It was under production when he passed away aged 70 on December 28, two days after being told he had an aggressive form of cancer.

In the promo for Finnish dairy Valio, created by ad agency Hasan & Partners, Lemmy is seen leaving a shop while walking with a stick. He glares at the camera and says: “I have never drunk milk. And never will.” Then he adds: “You asshole!” turns away and grins.

Agency boss Jussi Lindholm tells the Guardian: “We were in the middle of post-production when the news about Lemmy broke. We discussed not airing the ad, but we had footage that was not part of the original script which crystallised Lemmy’s spirit, so we agreed to change it and make a tribute.

“We are profoundly grateful to have worked with him, and that Lemmy’s management feel good about the result.”

Motorhead classic Ace Of Spades entered the Billboard chart in the US for the first time this week as fans downloaded and streamed the track following his death. UK fans will discover later today (January 8) if they’ve managed to place the song at No.1 on the weekend of his funeral, which will be streamed live online tomorrow.