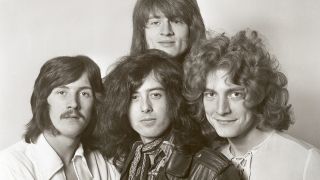 A new playlist programme in celebration of Led Zeppelin’s 50th anniversary has been launched.

Fans and artists can assemble their own personalised Led Zep playlists, complete with custom logo, and share it with friends across social media.

Visit the music generator to begin pulling tracks together from all of the band’s studio albums, live records and deluxe editions. Up to 50 songs can be selected and shared.

To kickstart the project, Jack White, Royal Blood and Maná have shared their own Zeppelin playlists, while other artists will do the same throughout the course of 2019.

White says: “They are an immovable force in music. I don’t trust anyone who doesn’t like them.”

Royal Blood’s Mike Kerr adds: “Led Zeppelin’s magic has always been about the chemistry that existed between the four members. Nearly 50 years on and the quality of the songs, the guts and the swag on these recordings, is untouched.”