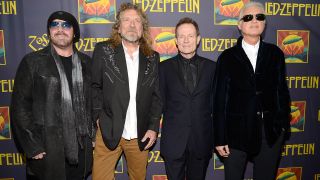 Led Zeppelin’s famous 2007 reunion performance is to be shown in full for free this coming weekend.

Robert Plant, Jimmy Page and John Paul Jones played with Jason Bonham at the Ahmet Ertegun Tribute Concert at the O2 in London on December 10, 2007 – a benefit show in memory of the co-founder and president of Atlantic Records.

It was Led Zeppelin’s first show in 27 years and saw approximately 20 million people applying for tickets through a worldwide lottery.

Celebration Day will be streamed through Led Zeppelin’s official YouTube channel, with the global watch party set for 8pm BST this coming Saturday (May 30), with a trailer available to watch below.

The film will only be available for three days before the video is taken down.

Led Zeppelin crammed in a total of 16 tracks on the day, including Black Dog, Dazed And Confused, Kashmir, Whole Lotta Love, No Quarter and Stairway To Heaven.