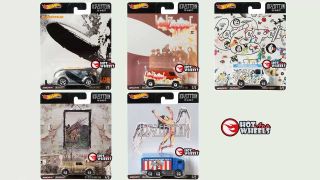 Led Zeppelin's iconic albums are being celebrated with the release of a series of Hot Wheels die-cast toy vans adorned with the band's artwork.

The five-vehicle collection is described by the manufacturers as a "New Hot Wheels Premium series for 2020, in commemoration of the British hard rock group Led Zeppelin."

A fifth toy, the "Hiway Hauler", is a miniature truck covered in art that celebrates Led Zeppelin's North American tour of 1975.

A dramatic video featuring the five vans being unboxed has been released by the YouTube channel Wheelcollectors, which calls the release "hot off the truck".

The toys are available from various sellers on eBay.

Last month, former Zeppelin frontman Robert Plant told Classic Rock that he has around 40 instrumental ideas for a new album.

"There are some things in the air, possibly in Nashville," said Plant. "I’m supposed to be going there in two weeks’ time. There’s nothing going on at all at the moment, but there will be.

“Between The Sensational Space Shifters’ guitarists Justin Adams and Liam ‘Skin’ Tyson and everybody, we’ve got about 40 different instrumental ideas already.

“We work with a guy called Tim Oliver, who’s the studio manager down at Real World, Peter Gabriel’s place, and we can mess about in there. I can spend an afternoon with Tim and really shift styles and stems of music in preparation to shape them as songs.

‘We’ve recorded the last two records with Tim and it’s a great way of doing things. It’s a good combination. We all know where we’re going.”

Plant was the cover star of issue 269 of Classic Rock, where he also chatted about other aspects of his solo career, his new podcast passion and more – and it’s still available to buy online.