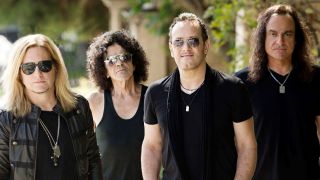 Last In Line have committed to playing a small number of shows following the death of bassist Jimmy Bain – but they haven’t announced who’ll replace him on stage.

He passed away of undiagnosed lung cancer in January, aged 68, while the Dio offshoot outfit were gearing up to promote debut album Heavy Crown.

Vivian Campbell, Vinny Appice and Andrew Freeman have all discussed how Bain’s input was integral to their operation, and they’ve confirmed his absence had put their future in doubt.

Now guitarist Campbell, also of Def Leppard, says: “It’s been a difficult decision to move forward and play without Jimmy. But Vinny, Andrew and I have decided to play a very limited number of shows with a great guest bass player.”

They’d already planned to appear at the Frontiers Rock Festival in Italy on April 23 and a deliver set at Rocklahoma in Oklahoma on May 27. They’ve now confirmed a warm-up show at Vamp’d in Las Vegas on April 14.

It’s not known whether further shows will follow, but Campbell’s Def Leppard commitments mean action is unlikely until next year. Heavy Crown was released last month.