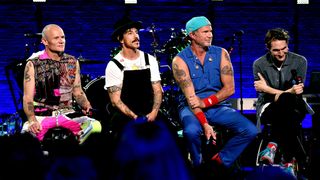 The band were called into an office by airport staff and asked to autograph CDs and photos – but to their surprise, the items were Metallica-related.

Chili’s bassist Flea says: “We were called into a custom officials’ office at an airport in Belarus and they asked us to sign a bunch of Metallica CDs and photos. We tried to explain to them that we weren’t Metallica, but they insisted that we sign anyway. They had the power.

“Well I did play Fight Fire With Fire with Metallica once. I love Metallica anyways, but I’m no Robert Trujillo.”

Red Hot Chili Peppers will play the Ontario Bluesfest and the Quebec Festival in Canada this week.