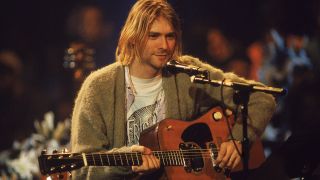 The green cardigan worn by Kurt Cobain for Nirvana’s MTV Unplugged performance has sold at auction for $334,000.

The sale was conducted over the weekend by Julien’s Auctions at New York’s Hard Rock Cafe at Times Square, with the garment breaking the record for the most expensive sweater ever sold.

The auction house originally described the “vintage green cardigan” as “a blend of acrylic, mohair and Lycra with five-button closure – one button absent – with two exterior pockets, a burn hole and discolouration near left pocket and discolouration on right pocket.”

Nirvana recorded the MTV Unplugged album in New York in November 1993 and it was released in November 1994 following Cobain’s death on April 8, 1994.

In May this year, a paper plate that Kurt Cobain once ate pizza from sold for an astonishing $22,400. The plate dated back to April 23, 1990, and includes Nirvana’s setlist from the 9:30 nightclub in Washington, which was handwritten by Cobain.