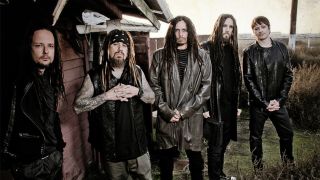 Korn guitarist Brian ‘Head’ Welch says the band are creating material for their next album at breakneck speed.

They recently began work on the follow-up to 2013’s The Paradigm Shift, with several members having speculated over its direction in recent months.

Head tells Do You Know Jack: “We started writing a few weeks ago and we have a bunch of ideas. It’s really coming out quickly.”

He adds: “It’s pretty danged heavy – we’re really pleased with what’s going on. We’re five guys in the band. We want everyone to be happy with the album. We want everybody to be smiling at the end of the process.”

He believes the resulting work could be “heavier than anyone’s heard Korn in a long time.” And he feels it’s been fuelled by the band performing their debut album in full on recent tours.

“I think it sparked and reminded everybody in the band what Korn started out to be,” he says. “It was all a journey, and that journey’s leading us back to some of the heavier roots this time.”

Korn continue on the road until November.

Korn on their debut album: "We were weird"