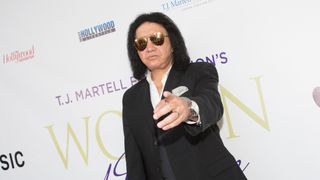 Kiss star Gene Simmons says he backs Apple’s plans to use infrared signals to prevent fans taking pictures or videos at gigs – but only if venues make it clear the technology will be in use.

The normally outspoken Kiss bassist took an unusually balanced view on the news that Apple were granted a patent that could see them develop technology to disable iPhone cameras inside concert venues or cinemas by using infrared signals.

Simmons tells Do You Know Jack?: “Do I think they should have the technology to shut off your stuff? Well, maybe with your ‘okay.’ You know, at least beforehand, they say, ‘Okay, you’re about to enter a no-cellphone area.’ That’s fine. As long as you know going in.”

Simmons says today’s gig audiences are very different to those of the past and that he doesn’t understand why anyone would want to spend a show looking at their phone.

“When we first started out, this was before cellphones or technology and even voice mail,” he says. “There was no cable, there was no nothing, so at the concerts, they took away your cameras – they didn’t allow you to do that.”

He adds: “So, in a lot of ways, the concert experience, especially with Kiss, was real – it was emotional, it was deep. People would pass out and cry.

“Technology has made everything less emotional. When you get back home and look at your cellphone and the video there, and you go, ‘Oh, I don’t remember that from the concert.’ Well, of course you don’t, because you were too busy texting or looking at your cellphone.”

Other artists, including Slipknot’s Corey Taylor, Kate Bush and Peter Frampton, have spoken out strongly against fans using camera phones at gigs.

Kiss frontman Paul Stanley this week said Kiss could make a new album, but admitted he knows fans would only tolerate new music rather than demand it.