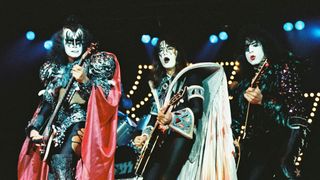 Veteran rockers Kiss now have an encyclopedia dedicated to them.

Author Brett Weiss is a lifelong fan of the band and his publication Encyclopedia of KISS: Music, Personnel, Events And Related Subjects has now been released.

Weiss, who has previously penned books about video games and popular culture, has made the opening section of the book available to preview via Amazon.

Last week, Kiss saw their concert movie Kiss Rocks Vegas released in cinemas across the world. It was shot during the band’s residency at the Hard Rock Hotel And Casino, Las Vegas, in November 2014.