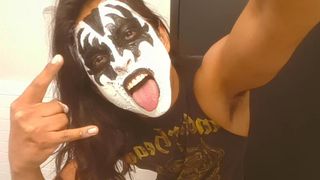 Earlier this week, music fans everywhere were left gobsmacked at the talents of a guy in Kiss makeup shredding the gonads off Monkey Wrench, live onstage with the Foo Fighters. That man was Yayo Sanchez, a man who is no stranger to Louder, having attended Rock 'N' Roll Fantasy Camp with Editor-In-Chief Scott Rowley back in 2007.

But who is Yayo? How the hell did me manage to blag his way onstage with one of the biggest rock bands on the planet? And how did he not crap his pants with sheer fear and adrenaline? We caught up with the man behind the makeup to find out how it all went down.

Why did you decide to wear Kiss makeup?

"Why not?! Ha ha. Kiss was such a huge part of my youth – they are pretty much woven into my DNA at this point. If you ask me, wearing Kiss makeup to a Foo Fighters concert makes perfect sense!"

How did you get Dave Grohl’s attention?

"Well, thanks to my awesome mom, I got a GA ticket for my birthday a few days before. I showed up to the concert early and found a good spot in the audience, and as most know by now, I painted my face and wrote 'Let Me Play Monkey Wrench' on a big piece of yellow poster-board. I held it up at the beginning of the show for a little bit until someone behind me screamed 'Put the fucking sign down!'

"I put the sign down for the rest of the set, until a few songs later Dave and Chris started talking to me from the stage. Dave looked at me with his face all scrunched as if trying to focus in and said, 'Dude, is that paint or a mask?' I replied 'Paint!' Then Grohl said something like, 'Hell yeah dude, I can fuck with you Kiss Guy!'

"Somewhere in all that, Chris mentioned how he preferred Ace Frehley! The entire time the two of them were talking to me, the voice in my head was like 'Show them the sign! Show them the sign!' And bam, at the very last second I said fuck it and flashed my sign up.

How did it feel when you first got onstage with Foo Fighters?

"Oh man, mega jitters! I mean, of course I wanted it to happen – I’ve been fantasising about this moment my whole life – but you never really think something like that is actually going to happen to you. I am beyond grateful."

Are you a big Foo Fighters fan?

"Oh yeah, brother! Ask anyone that knows me, I'm a huge Foo Fighters fan – along with the rest of the world! And after all this craziness I’ve become more of a fan!

"I’ve always admired from afar how cool and humble everybody in the Foos is; not to mention the great songs and tight performances. I feel like not all great rock bands are actually really cool people. Foo Fighters rule."

Did you have any plans of what you wanted to do when you got onstage?

"Walking up to the stage, I had a two second conversation in my head telling myself to chill and just focus on playing the song right. The running around came from a last minute 'Ah, fuck it! Ride or die, bitch! Go!"

Why did you want to play Monkey Wrench?

"Monkey Wrench is a rad song! The uptempo, punk-rock feel is perfect for when you put yourself in a crazy situation that already has your adrenaline pumping!"

Some people online are saying this was a staged stunt, was it?

"No. Foo Fighters had no idea a dude in Kiss makeup was going to show up with a sign that said 'Let me play Monkey Wrench'. But yes, I did practice the song leading up to the show with hopes that this one in a million chance would actually happen."

Did you get to hang out with Foo Fighters after the gig?

"No, but their guitar techs were really cool to me – they gave me FF picks and one of Dave's wristbands. The people enjoying the show from side of the stage were really nice to me; handing me beers and water, and really going out of their way to make it that much more magical."

Are you in a band right now?

"My band is called Y – I just released a new song called Mothership. I have been working on this sound for four years now and I couldn’t feel more proud. Crank it!"