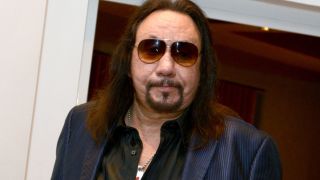 Ace Frehley has revealed his upcoming covers album will include material by Led Zeppelin, the Beatles and the Rolling Stones.

Now Frehley tells Billboard: “The album’s going to be about my influences. I’m probably going to do a Rolling Stones song, a Who song, possibly a Led Zeppelin song, maybe a Beatles song – stuff from bands that I grew up on and greatly influenced me. Those are the songs I’d redo, besides vintage Kiss stuff and a Frehley’s Comet track.”

He plans to include Kiss tracks Cold Gin and Parasite, adding. “On Kiss records, I’m not singing lead. So I’m going to sing lead on them like I do live,” he says.

He’s also toyed with the idea of inviting former bandmate Gene Simmons to appear, after recently insisting the pair were still “brothers.” Frehley says: “I was actually going to ask Gene to play bass on a track and sing with me. I haven’t gotten to that stage yet.”