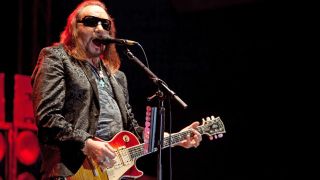 The news comes before the launch of his sixth solo album, Space Invader, later this month. That project has been several years in the making, but Frehley believes the follow-up will be easy to make.

He tells Arena.com: “I get suggestions, I come up with ideas, and I ask friends and associated about which songs to do. They’re already written so it’s faster and easier. I don’t have much to do – the big stress is coming up with new guitar solos, vocal lines and melodies on new songs.”

He’s hoping the covers record will appear next year. Meanwhile, he describes Space Invader as something of a departure from 2009’s Anomaly.

“It’s heavier – I did it by design,” Frehley reports. “My fans said my last album could have been heavier, and could have had more guitar work, so I kept that in mind. The biggest surprise is the title track – that was instrumental until we were mixing it. I went to my hotel and wrote lyrics and melody, and through it together in one day.

“Songs like Toys and_ Inside The Vortex_ are heavier than anything on Anomaly. Hopefully people will love it.”

Meanwhile, Classic Rock will release Slash’s third solo album World On Fire as a Fanpack on September 15 – a full four weeks ahead of its regular release date.