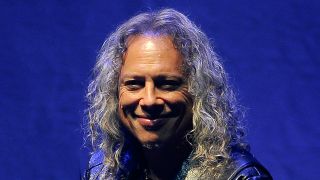 Metallica’s Kirk Hammett says he has a “ton of material” for the band’s next studio album.

Bassist Robert Trujillo reported last month that they had been working on new ideas while out on the road. And with Hammett sitting on a number of guitar parts, he tells Mixdown (via Tone Deaf) that he’s "ready to go" on a new record.

Hammett reports: “When I was 13 or 14 years old, bands put out albums every year. Seriously, Kiss put out an album every eight months – none of this eight years between albums.

“None of us are very comfortable with the fact it’s been so long, because that’s a long time. We’re hoping to avoid that this time around.”

He adds: “We’re in our third year since since Hardwired… To Self-Destruct. Maybe we can get a bit more focus and go into the studio a bit sooner.

“I have a ton of material. I’ve over-compensated, so I’m ready to go anytime.”

Let’s hope Kirk has all his new material backed up. He famously lost 250 ideas for Hardwired… To Self-Destruct when he lost his phone in 2015.

He told The Jasta Show: “I was bummed for about two or three days. I’m still looking for it to this day. It still might turn up.”

He said of the riffs he lost: “I can only remember, like, eight of them. So I just chalked it down to, ‘Maybe it just wasn’t meant to be,’ and I’ll just move forward.”

Metallica will kick off their European stadium tour in Lisbon on May 1.