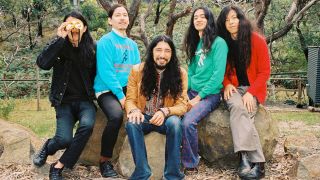 Masana Temples will be the band’s first album since 2016’s House In The Tall Grass and follows the 2017 EP Stone Garden. It’ll launch on October 5 via Guruguru Brain.

To mark the announcement, Kikagaku Moyo have shared the new track Gatherings, which can be listened to below.

Vocalist and drummer Go Kurosawa says: “Gatherings is the oldest song on this record. With this song, we’re expressing our journey in the world.

“We’ve gathered everyone in the band’s ideas in this song along with the ideas and influences of the places we’ve visited throughout our travels.”

Kurosawa is joined in the lineup by vocalist and guitarist Tomo Katsurada, guitarist Daoud Popal, sitar and keyboardist Ryu Kurosawa and bassist Kotsuguy.

They’ll head out on tour across Europe later this year.

Masana Temples is now available for pre-order via Bandcamp.