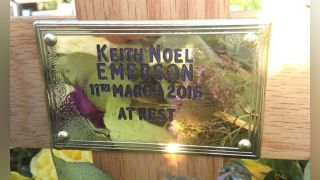 Keith Emerson was laid to rest at a private ceremony on Friday by his family, after his tragic death at the age of 71 last month.

The Emerson, Lake and Palmer icon’s passing was ruled a suicide after he was found at home in Los Angeles with a self-inflicted head wound, leading the prog world to pay tribute.

His son Aaron Emerson, also a musician, posted a picture of his father’s grave yesterday and said: “I would like to thank all the thousands of people who have sent messages of love and condolences to myself and my family after the passing of my father.

“We followed his wishes, and he has been laid to rest in Sussex. Rest in peace Dad.”

Guitarist Dave Kilminster posted a scene of the churchyard and reported: “It was a warm, sunny afternoon when we said our final goodbyes. I was asked to sing a song during the service. I don’t think I’ve ever felt so nervous – but it was such a beautiful ceremony, with so much love. I don’t think the day could have gone any better.”

Drummer Carl Palmer has reorganised his upcoming North American tour with Carl Palmer’s ELP Legacy as a tribute to his ex-colleague, saying: “We have lost a very talented and gifted musician but this great music will continue for a long, long time.”