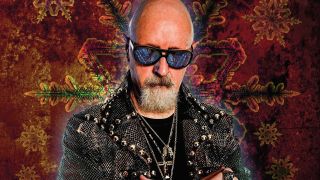 It’s titled Celestial and will be the Judas Priest frontman’s second Yuletide release and follows Halford III: Winter Songs, which launched in 2009.

Like the previously release, the new album will feature a collection festive favourites which have been given a metal makeover, including Away In A Manger, The First Noel, O Little Town Of Bethlehem and Good King Wenceslas.

Celestial is set to arrive on October 18 through Legacy Recordings.

Along with the traditional Christmas tunes, Celestial will also include four original songs which were recorded for the project: Celestial, Donner And Blitzen, Morning Star and Protected By The Light.

And to mark the announcement, Halford has released a video for Donner And Blitzen which can be found below, along with the cover art, tracklist and pre-order details.

Halford is joined on Celestial by a number of associates, friends and family.

Next year will mark Judas Priest’s 50th anniversary, with the band revealing last month that they would play a special set to mark the milestone at Wacken Open Air which will take place between July 30 - August 1.

The band will also be special guests of Ozzy Osbourne on the rescheduled UK and European leg of his No More Tour 2 shows in early 2020.