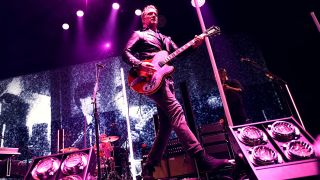 Josh Homme has apologised after he kicked a female photographer in the head during a Queens Of The Stone Age show in Los Angeles on Saturday night.

Chelsea Lauren was covering the KROQ Almost Acoustic Christmas show for Shutterstock over the weekend when Homme kicked out at her as he walked across the stage. He connected with Lauren’s camera which in turn hit her in the face.

She later posted a video of the incident on Instagram, which can be seen below.

Lauren told Variety that she was sure it was “very intentional” and added: “Josh was coming over and I was pretty excited, I’ve never actually photographed Queens Of The Stone Age before, I was really looking forward to it.

“I saw him coming over and I was shooting away. The next thing I know his foot connects with my camera and my camera connects with my face, really hard. He looked straight at me, swung his leg back pretty hard and full-blown kicked me in the face.

“He continued performing, I was startled, I kind of stopped looking at him, I just got down and was holding my face because it hurt so badly.”

Lauren also reports that following the incident, Homme took out what appeared to be a knife and deliberately cut his own forehead.

Homme then issued a statement, initially suggesting that it had been an accident.

He said: “While in a state of being lost in performance, I kicked over various lighting and equipment on our stage. Today it was brought to my attention that this included a camera held by photographer Chelsea Lauren.

“I did not mean for that to happen and I am very sorry. I would never intentionally cause harm to anyone working at or attending one of our shows and I hope Chelsea will accept my sincere apology.”

Homme has now issued a second apology in a Twitter video, saying: “I would just like to apologise to Chelsea Lauren – I don’t have any excuse or reason to justify what I did. I was a total dick and I’m truly sorry, I hope you’re OK. I’ve made a lot of mistakes in my life and last night was definitely one of them and I apologise for that.

“I want to be a good man, but I think last night I definitely failed at that.”

Home then says sorry to his friends, family and bandmates and adds: “I’m going to have to figure out some stuff I think because rock’n’roll is a wonderful thing – it’s supposed to save and help people not mess them up, so Chelsea Lauren I hope you’re OK.”

Lauren had to spend time in hospital on Saturday night and told Variety that she intended to file a police report.

“I feel like if I don’t do anything, he gets to kick people in the face and not get in trouble because he’s a musician,” she said. “That’s not right.”