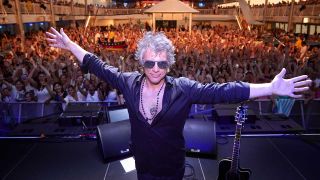 Jon Bon Jovi has announced that he’ll head out on a music cruise in the Mediterranean later this year.

He’ll set sail with 2500 fans from Barcelona on August 26 and also take in Palma, Majorca, with the cruise dropping anchor on August 30.

The Bon Jovi leader will perform two shows onboard, and he’ll be joined by a support lineup featuring Johnny Rzeznik of The Goo Goo Dolls, Grace Potter, Betsie Gold, Slippery When Wet and more.

The vocalist and guitarist will also host an acoustic storyteller set, while panels and further activities are also scheduled to take place.

The news comes just after Bon Jovi held a similar event in the Caribbean, which set sail earlier this month.

To make a reservation, visit the official Runaway To Paradise website.