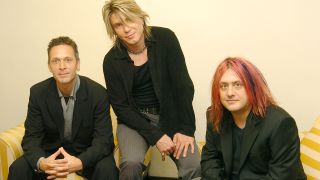 The story behind the song: Iris by Goo Goo Dolls

Johnny Rzeznik’s life wasn’t working out the way he’d planned it. The band he fronted – the Goo Goo Dolls – looked to have peaked with their 1995 hit Name. His confidence as a songwriter was in tatters. Worst of all, the collapse of his marriage had left him living out of a suitcase in a hotel in downtown LA.

“It was 1997 and I was feeling kinda schizophrenic,” Rzeznik recalls. “My wife and I had just broken up, and I’d met another girl who I was really into. I’d moved from my home in Buffalo, New York, and was living in this hotel. So it was a really manic time in my life. I was looking for something to hold on to.”

As always, Rzeznik chose music. On the morning of the day he wrote Iris, the singer had attended an advance screening of City Of Angels – a film whose premise concerned an angel [played by Nicolas Cage] who surrenders his immortality to be with the woman he loves [Meg Ryan]. Rzeznik hadn’t particularly enjoyed the movie, but had his reasons for agreeing to contribute to the soundtrack.

“I didn’t actually think it was very good,” he explains. “I just thought it was a sanitised version of [Wim Wenders’s 1987 film] Wings Of Desire. But one of the reasons I wanted to do a song was because the soundtrack had U2 and Peter Gabriel on it, and I wanted to be on the same piece of plastic as them. It made me feel like I was hob-nobbing with musical royalty. I thought that someday I could show it to my kids – tell them their old man was once on a record with Bono and Peter Gabriel.”

Back in his hotel room, Rzeznik was amazed by how quickly his song took shape: “Most of the time, for me, writing involves procrastination, fear, doubt, criticism… Most songs I write I have to torture myself; be a prima donna for about an hour. But Iris came so easy. I’d broken two strings on my guitar, so I’d started winding all the strings up and down in these weird configurations, and that song just came out. It was like a gift – like: ‘Oh, thanks God!’”

By the time Rzeznik had ironed out some of the “ugly chord sequences”, he had a swooning future classic on his hands. Only the name was required. “I’m horrible at naming songs,” he says, “so it’s the last thing I do. I was looking through a magazine called LA Weekly and saw that a great singer-songwriter called Iris DeMent was playing in town. I was, like: ‘Wow! What a beautiful name.’

Rzeznik recognised Iris as one of his greatest achievements to date. But it wasn’t until he was recording it that he realised how far the song had taken the band from their punk roots.

“That was the first time we’d ever been in the studio with strings,” he recalls. “I remember kneeling in front of the control room window, looking out at this 15-piece string ensemble, then looking at Robby [Takac, bassist] and saying: ‘I really think we’re turning a corner here, and I don’t know if I want to’.

“But it’s part of your personal evolution,” he continues. “When I was 18 I played three power chords and wanted to be Paul Westerberg. But as you grow up you change, you want different things, and your art has to stay in step with where you are emotionally. So I guess Iris is partly the sound of me growing up.”

It was undoubtedly Rzeznik’s ballad that pushed the City Of Angels soundtrack to the top of the US chart in June 1998 and bolstered the band’s own Dizzy Up The Girl album, while the song itself began a five-week run at No.9 in the US. Commercially, the Goo Goo Dolls had arrived.

“It didn’t change us,” Rzeznik says, “but people around us changed. We started getting more attention, made a bit of money… and it was actually really, really uncomfortable. It never made me wish I hadn’t written it, because now I’ll be able to send my kids to college, but obviously there are by-products of that kind of success that you have to avoid. The number of choices you have grows exponentially, like, I can have this, I can have that, I can date her, I can snort this – and I can afford it’.”

Ultimately Rzeznik chose to embrace his masterpiece. In 2007 it remains the centrepiece of the Goo Goo Dolls’ set-list, the ultimate alt.rock ballad and the singer’s best chance of immortality.

“I’m proud of it,” he admits. “Because it gave me some confidence in myself at a time when that was lacking. Every night when we play it and I put the mic out to the audience and everybody sings it, that’s an amazing feeling. It’s, like, at least one of the songs I’ve written will be remembered.”