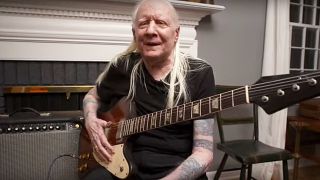 The producer of Johnny Winter documentary Down & Dirty has released a bonus scene in which the late bluesman performs a solo version of Murdering Blues.

The film was released last week by Greg Olliver, known for his work on the acclaimed Lemmy documentary.

In the clip, Winter discusses his Gibson Firebird guitar, saying: “ I thought it looked cool, it sounded cool, it played good, so I bought it. $225, that’s all it cost back then. Of course, that was back in the 1970s. It’s the coolest-looking guitar I’ve ever seen.”

He also talks about how and why he learned slide guitar, his first instrument and taking lessons when he was 12 years old.