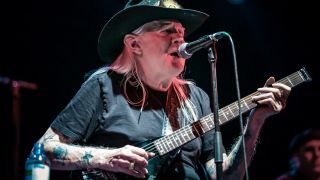 Johnny Winter has died at the age of 70, it's been reported.

Sources close to the veteran bluesman have confirmed his passing to American Blues Scene. He was due to release his 19th studio album Step Back in September.

Winter – elder brother of Edgar – was born in the MIssissippi delta and started out playing alongside Muddy Waters, B.B. King and others in his teens. Following the launch of 1968 debut album The Progressive Blues Experiment he signed to Columbia for the largest advance ever paid.

He fought drug addiction during the 1970s before collaborating with Waters on 1977 Grammy-winning album Hard Again, and went on to produce several of his colleague’s later releases.

Jenda Derringer, wife of Winter’s former colleague Rick, reported last night: “We were just told by a reliable source that Johnny has passed early this morning in Zurich, Switzerland. He was not in good health, and very frail and weak.”

Among those paying tribute via Twitter were former Guns n’Roses drummer Matt Sorum, who said: “I’ve just become close with Edgar and I’m so sad for him and his family. They had plans to tour.”

The Blues Magazine editor Ed Mitchell said this morning: “It’s no secret that Johnny has battled with ill health for many years – but he seemed to transcend that struggle when he played live. No one’s slide tone was as sweet, searing, stinging or fiery. Johnny Winter blazing away on a Gibson Firebird is an iconic blues image.

“He was the greatest slide blues guitarist that ever lived. We’ll always have him to thank for pulling Muddy Waters out of his funk in the seventies and helping him record some of his greatest work: Hard Again, I’m Ready and King Bee. All essential.”

In an interview with Journalstar.com last month Winter said: “When I was about 12 I knew I wanted to be a musician. The blues had so much emotion and so much feeling; if you don’t have that you’re not going to be good at it.”

He reflected: “I’ve never won a Grammy on my own – I’d like to do that. The ones I’ve got have been with Muddy. I’ve been nominated a lot of times but never won.

“I just hope I’m remembered as a good blues musician.”

Details of his death have not yet been revealed. Step Back, which includes collaborations with Eric Clatpon, Billy Gibbons, Joe Bonamassa, Leslie West, Dr John and others, currently remains scheduled for release as planned.